Digital: Better for Users, Simpler for Staff, Cheaper for Government

With a shared ambition to become ‘digital be default’, maximise service delivery, increase efficiency and lower costs, central and local government along with the wider public sector must explore innovative methods, solutions and tools to achieve their digital ambitions. With this in mind the Digital Government conference took place on Tuesday 8th July at the QEII Conference Centre, London.

Over the course of the day influential speakers focussed on how the public sector can deliver services to the citizen digitally, enhance the UK’s digital skill base, deliver high quality digital channels, harness the power of social media and adapt to a future of more open data and greater transparency within government.

The day was kicked off with an inspiring keynote address on the government’s digital revolution from StephenKelly, COO, HM Government. He highlighted the need to view ‘Government as a platform’ and for all digital services to be ‘user-centric’. Stephen highlighted three goals for the digital government:

- Improve public services
- Drive growth and innovation
- Save money and protect frontline services
The future should be ‘not centralised, not localised, but networked’.

Stephen highlighted several central government departments that were meeting their digital exemplar goals and providing a foundation for innovation, these included Defra, HMRC, Ministry of Justice and DVLA. Another department with excellent digital exemplar track record is the Department for Business, Innovation and Skills and Tim Knighton the Chief Digital Officer offered the second presentation of the day.

Tim’s presentation highlighted several key factors that should be considered during digital transitions:

- User needs should drive design and digital engagement
- Expect culture change when building digital services
- Don’t take paper forms and put them on screen: Design from the ground up

The challenges highlighted by BIS can be seen below: 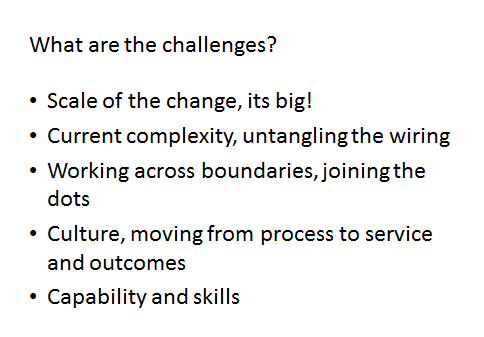 The next morning speaker was Joe Dignan, Innovation Service Manager, Bristol City Council was shared with the audience the potential for smart cities in the UK. 50% of the world now live in a city and this expected to increase to 60% by 2030 and the UK is leading the global push for smart cities. According to Joe the foundation for a smart city is open data and connectivity. Steve Walters, CTO, HMRC quickly followed Joe and discussed the departments push towards digital services.

Oliver Morley, Chief Executive and Digital Leader, DVLA who kicked off the session with the following DVLA by numbers slide: 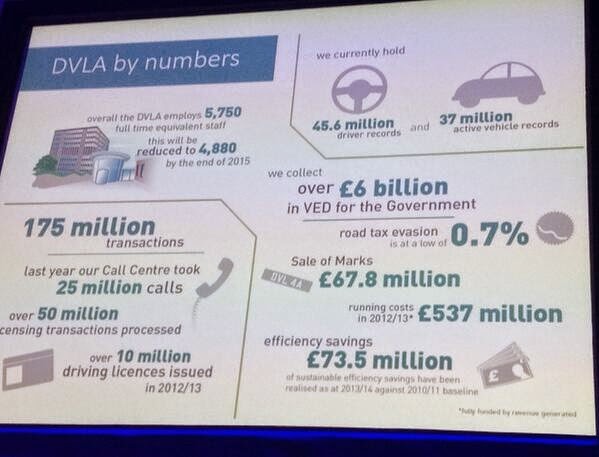 Stephen Kelly earlier highlighted feedback that claimed DVLA's digital services were on a par with eBay and Amazon. Alongside the digital agenda comes security concerns and these were addressed in the next presentation by Dr Pete Armstrong, Technical Director, Identitiy, CESG. This presentation focused on tackling the increasing threat of cyber crime in the digital space.

The digital agenda is not only being pushed by central government, local government are also leading digital revolution. John Jackson, CIO, Camden Council provided the audience with insights in to how local authorities can redesign services in digital formats to increase efficiency and meet user needs. The conference was closed by Penny Fox, Head of News, DECC - Penny is a social media expert who highlighted the growing trends and use of social media amongst central and local government. Particularly interesting was the use of social media by Defra in their campaigns and awareness raising programmes.

The education landscape is experiencing radical change which is re-moulding the infrastructure of future learning environments. Technology is a high spend consideration for most schools yet smarter spending on the right equipment and infrastructure ensures that learners are engaged and motivated and that every pupil reaches their potential. With this in mind the Education ICT Conference took place on Tuesday 10th June at the QEII Conference Centre, London – attendees joined to explore new ideas and innovations in the curriculum, teaching and resources and to properly equip pupils both in school and in their future careers.


Over the course of the day influential speakers focused on how schools can make ICT investment count, nurture digital skills and creative computer science, upgrade ICT infrastructure to make learning environments fit for the future, safeguard devices and explore BYOD.


Ian Livingstone CBE, Co-Author, NextGen Report, Chair, NextGen Skills Committee, Government Advisor on ICT Curriculum Reform kicked off the day with a motivational speech on the future of computing in schools and highlighted the ways games skills can help children to develop life skills. Next was Peter Hughes, Head of Schools ICT Procurement, Schools Commercial Team, Department for Education with a presentation on what factors add up to effective and best value ICT. Peter highlighted the following exciting statistic:


This indicated education ICT will be a huge part of the teaching and learning environment in the future, but what ICT and technology should be used, at what cost and how should it be procured? Sarah Hurrell, Commercial Director – Technology, Crown Commercial Service aimed to answer these questions in her presentation on G – Cloud and central government procurement.


Simon Peyton-Jones continued the morning’s discussion with a session on creative computer science and the new national curriculum. His session received excellent feedback from the audience and offered insights on how to use technology to teach other subjects. He also focused on how teachers can use subjects to prepare our children to solve problems that don’t yet exist: 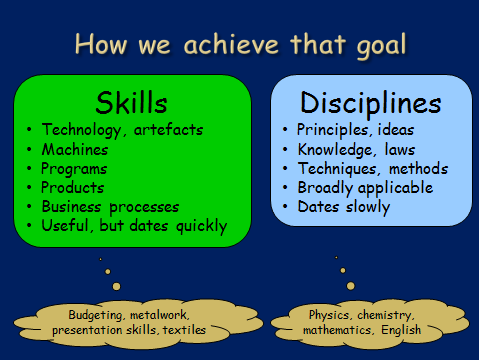 Next on the agenda was cyber safety and protecting children online presented by David Wright, Director, UK Safer Internet Centre who noted e-safety is a child protection issue not an ICT issue and 72% of children feel the need to be available to friends online.


Kevin Tansley, Head teacher, Ty Gwyn Special Needs School, Wales offered an inspiring presentation on supported learning for children with special educational needs using technology. Kevin went on to explain how Ty Gwyn went from adequate to outstanding in six years and how a new school was built for £16million with outdoor access for every classroom. The morning’s session came to a close with a presentation by Dawn Hallybone, Deputy Head, Oakdale Junior School and Children’s Centre. The last presentation of the morning offered insights into the development of digital leadership and networks in schools and how digital leaders can help teachers, promote the new curriculum and allow children to develop their digital skills.


The new computing curriculum was a major discussion on the day and Rob Belli, Standards Division, Department for Education presented on:
BYOD in Schools was another hot topic of the day and Mike Gunn, Head of Creative Arts, Finham Park School offered excellent insights in to Finham Park School’s BYOD experience. Mike was quickly followed by Drew Buddie, Head of ICT, Royal Masonic School, Junior vice Chair, Board of Management, Naace whose presentation comparing ICT teachers to Game of Thrones characters proved to be very informative.
Posted by C at 14:31 No comments:

Preventing and Reducing Fraud and Error

After the National Fraud Authority’s June 2013 report found fraud and error is costing the UK public sector £20.6 billion and the Government’s calls for a zero tolerance approach to fraud and error, there has been renewed pressure placed on both national and local governments to prevent and reduce fraud and error. With this in mind the Fraud and Error Conference 2014 took place on Thursday 15th May at One Great George Street, London – attendees joined to explore new methods, technologies and software that can assist the public sector in improving methods used to identify, detect and prevent fraud and error. 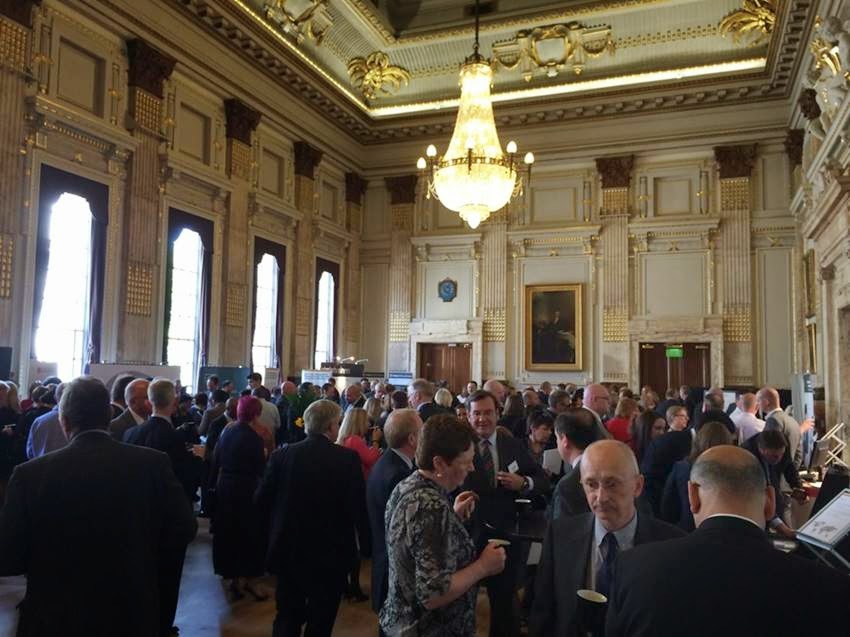 Over the course of the days discussions influential speakers focused on how public sector initiatives can save £22.4billion between 2014/15 and how new counter-fraud strategies can be used to mitigate future threats. Key questions considered by those in attendance included:

-          How to increase workforce capability and recover more debt
-          How to target resources effectively to tackle social housing and tenancy fraud
-          How to develop greater strategies to assist in the investigation, prosecution and prevention of fraud
The conference was opened with a keynote address from the Cabinet Office, Lesley Hume, Executive Director – Fraud, Error, Debt & Grants and Mark Cheeseman, Head of Fraud and Error Policy joined the event to offer updates on the Fraud, Error and Debt Taskforce, paint a picture of the evolving fraud and error landscape and discuss the real cost to government. They highlighted the fact that exposure to F&E could equal half of government borrowing but distribution of losses was uneven – 80% of known losses from HMRC and DWP. Lesley and Mark’s presentation was followed by a session lead by Coactiva (Andrew Davis and James Rawlins) which focused on the practicalities of tackling F&E with case studies on tax credits and housing tenancy fraud.

Next Alan Bryce, Head of Counter Fraud, Audit Commission offered his thoughts on the ways local and central government can prevent fraud and ‘Protect the Public Purse’ – his presentation highlighted the following:

The Fraud and Error conference was closed by Mark Astley, Head, National Anti-Fraud Network (NAFN) who offered a presentation on counter fraud strategies to mitigate future threats.
Posted by C at 17:26 No comments: